The Power of Wifi in Automobiles

Home 2016 Uncategorized The Power of Wifi in Automobiles 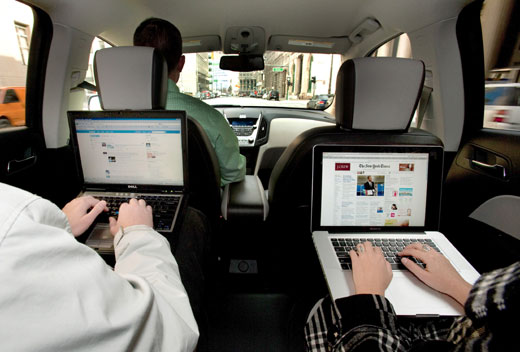 The Power of Wifi in Automobiles

This past week I decided to take a break from my busy life in Chicago and go and visit my father, step-mother, and two step-brothers in Ripon, California.  I am having such a good time that they suggested we all go to Yosemite Saturday morning to wrap up the good trip. I am to leave the next day, Sunday, so naturally I was very excited to do something out of the way and fun with the whole family!  I soon realized though that I had some work I needed to finish on my computer before I left so I reluctantly told my family we may not be able to leave on time to Yosemite, my father and step-mother gave me a laugh and told me they had wifi in their new Chevy Traverse!  I couldn’t believe it!  I knew that in Chicago the CTA was just starting to get wifi and such, but I never thought that a car would be able to give wifi to passengers. I’m not sure why I thought of this as strange, but it sure was a new idea to me.

After hearing this news I decided to write my blog in their car to see if I would be able to use my laptop and complete my work without any trouble and currently I am in the car writing away!  My mind is currently being blown! To be fair though, there are some obstacles in the way of having perfect auto wifi, such as tunnels and I know back in the city that skyscrapers will most likely be a wifi block, but I am lucky to be in beautiful Northern California where there are next to no tunnels or absolutely no skyscrapers so I am not having any problems.

This idea of having wifi in automobiles is going to revolutionize the way people work and complete their business!  We all know that smartphones are a great way to do business when a computer cannot be used, but they just cannot do certain tasks needed at times so wifi in automobiles is going to really help businessmen and women! As a content creator I know I am happy that wifi in automobiles is coming to life! I have had plenty of instances where I am riding in an automobile and would love to do work on my laptop, yet I am stuck trying to complete the task on my smartphone, which ultimately ends in me just taking a snooze because I cannot do as much as I originally wanted to complete.

The idea of Wifi in automobiles has been an idea since 2008 when Chrysler decided to jump on the wagon and provide wifi to customers.  This was slow moving but Chrysler has now reached their goal!  My dad explained to me the day before our trip that he only has 3GB of wifi in his car so I am typing very fast to make sure that I do not suck his car dry.  He also stated that for the first three months he has free wifi, but what does 3GB of free wifi really get the customer?  He cannot really do business work because he is usually driving and there is no way my step-brothers could watch a movie because the 3GBs would be gone in a matter of days!  He did say after the three months that he will start paying for the wifi, but it will not be cheap!  Wifi in cars will probably be about $30 a month for the minimum and anything over the minimum will most likely be ridiculously expensive!  Also, I can see companies working on a GB basis and anyone who goes over the GB they are given will have to pay more, just like with a phone.
As much as I would love to type on and on about this fantastic subject I have to get going.  Wifi isn’t cheap, you know!